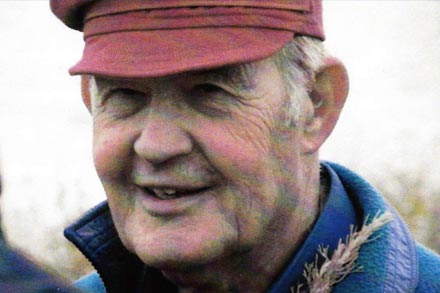 It is with sadness that I have to report the passing of our President, Richard Roberts. Richard died peacefully on the 15th February after a short illness.

Richard will be greatly missed off the water and most certainly on it. In earlier years Richard and his boat Quantz were almost inseparable. On returning from various cruises, including those from the continent, it was not uncommon to find Richard and Quantz waiting to welcome the fleet home. He was also an accomplished author as many of you will know if you read his books, 10 Footers And All That and Beyond The Bar. They cover many aspects of sailing, local knowledge of the rivers and history of the Orford 10 Footer class. If you haven’t read them I urge you to do so. I know Richard was highly regarded amongst previous Commodores, and the current one, for his quiet and thoughtful approach to matters at the sailing club when asked for advice.

The family will provide a full obituary to members in due course. I’m sure you all join me in sending our thoughts and best wishes to the family.

Well, what a difficult year. None of us would have expected that after the first lockdown, a year later we would still very much be feeling the effects of the pandemic.

We were able to get some dinghy sailing and racing in, in between lockdowns. We also had youngsters making full use of the slipway for swimming during a long hot summer.

My thanks go to all members for their continued support to both myself and the Committee. Sheena and her team worked hard with a training calendar and Helen a social calendar — unfortunately all had to be cancelled. Troy’s sailing calendar mostly went by the wayside but under his leadership and dogged determination two regattas and some racing were able to take place (see his report below).

From your Sailing Secretary

In all respects, 2020 was an extraordinary and turbulent year and I will not comment on the pandemic here other than to say it did not stop us holding two successful Regattas — Junior and Senior in August and a regular informal, socially distanced weekend race throughout the season, only occasionally cancelled due to poor weather.

In September the Harry Edwards race series was well attended and won by Chris Gerard.

The Frostbite series in November stretched until December this year again due to some rescheduled races on account of the weather. I’m pleased to tell you that Mike and Judith Shallow were able to retain the Frostbite trophy having seen off all other challengers.

For the 2021 season I am pleased to tell you that we intend to schedule a full calendar of sailing and we will adapt as we go, depending on advice from the government.

I look forward to seeing you on the water in the spring when the weather turns more clement. Troy (Sailing Secretary)

The pontoons at the club were looking sad and on full inspection were found to be in a perilous state. As a Committee we have decided to replace the offending sections of pontoon and hope to have the new ones in place soon after the start of the season at the latest.

Organisation for the coming season has been continuing at pace and is now completed. We are publishing a full calendar in the hope that we can achieve as much as we are allowed.

Please find enclosed your documentation for the AGM and your admin paperwork for the season. Please ensure you return the relevant forms promptly as this makes our job so much easier.